Talking about the new castle in Wayfarer and its impassable gate has got me thinking about other barriers in Tyria and what might lie beyond them. I surveyed my map and made my way back to a lot of these places I remembered from previous adventures. I quickly discovered that a lot of these areas could be accessed through events I had yet to discover, by completing a jumping puzzle, or through a personal story path. Still the most interesting were those pathways that I couldn't get past. These routes are blocked off presumably because the content behind these barriers has not yet been released. Today I would like to share with you some of these locations in Tyria and speculate as to what might lie beyond.

The first, and one of the most obvious, is the gate guarded by Tengu in Caledon Forest, near Titan's Staircase Waypoint. 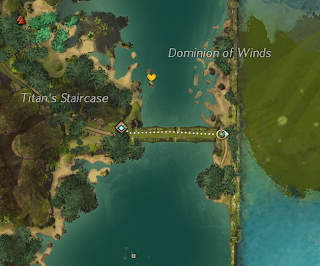 This is the view that will greet you as you approach. A massive wall blocks passage along the entire eastern extent of this zone. The Dominion of Winds lay beyond. 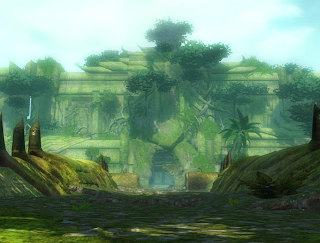 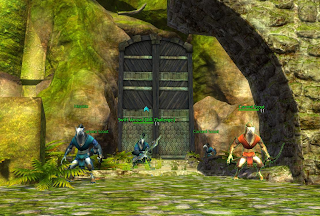 You can speak with the local Tengu to attempt to learn more. The one that will talk is reluctant to give details. The others seem to be basking in the monotony of guard duty. 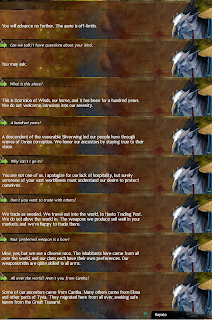 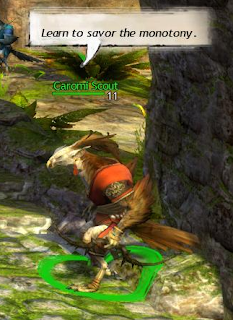 Although there personalities may be lacking the Tengu look awesome and would make an amazing playable race. Now if the last Tengu city lays beyond these walls, presumably, if Arena Net added them as a playable race their capital city would be right there. It is a good location as it is beside a starting level zone and near the other major cities. The stage is set for them to enter the game, the question is, will Arena Net pull the trigger?

If you want to learn more about the Tengu there is another small camp where they trade in Caledon Forest at Hanto Trading Post just east of Trader's Green and Caledon Haven Waypoint. There is also a Guild Wars 2 wiki article about them, the "Great Tsunami" and the Dominion of the Winds. Even more can be found on the Guild Wars wiki where you can learn about the various Tengu tribes and a war between the Tengu and Canthans.

Finally, the Tengu city was built on top of an area that was accessible in the original Guild Wars called Sanctum Cay. I have never played Guild Wars so all I could tell you is what is on the wiki article or what I see in youtube videos. It appears to be an instanced mission where you are tasked with delivering a scepter to an NPC. Along the way you battle drakes, giants, undead, and White Mantel forces. Will we ever visit this island in Guild Wars 2? Only time will tell.

Next we move to Sparkfly Fen. On the western side of the map is a blocked off pathway near Karinn's Passage north of Forvar's Waypoint. 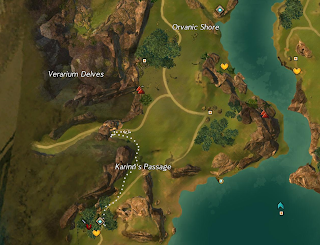 The way is blocked by a stone barrier. 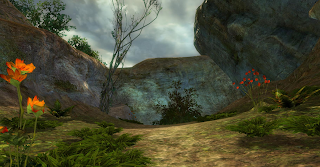 Way back in November, before access to Southsun Cove was granted by boat in Lion's Arch, I thought this is where we would access the island from. With those events long past it remains a mystery where this may lead, however, on Southsun we can discover what looks like another pathway leading to the same area. 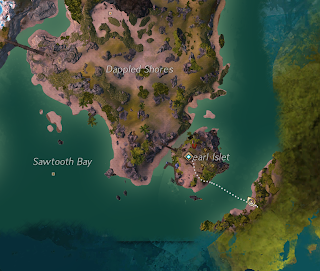 Again the path is blocked by a stone barrier. 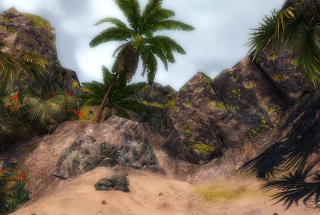 What could possibly fit in the narrow area between Southsun and Sparkfly Fen? It would have to be an extremely narrow zone or perhaps Southsun Cove will be expanded in the future. Maybe with a small refugee city on the land between the zones? Or maybe a zone related to the Tengu if they are ever added as playable race.

Next, near Ebonhawke is a gateway leading to the Crystal Desert. This is area I most look forward to opening but for now we are just presented with this locked gate near the Blackwing Excavation east of Ebonhawke. 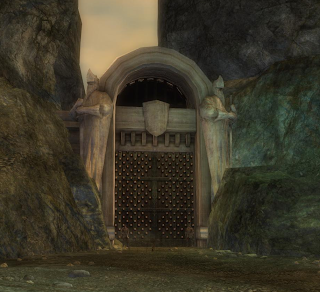 You can talk with the two guards, but do not expect to learn much. 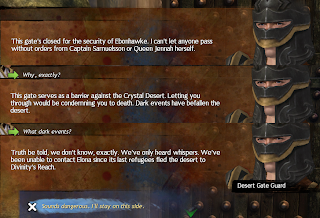 By playing through the story mode of the dungeons we learn about Destiny's Edge and their battle with Kralkatorrik. These are events that took place very recently in the Guild Wars timeline just five years ago. I hope we as players get to finish the job Destiny's Edge couldn't and slay the dragon.

You can get a feel for what might lie beyond this gate from the original Guild Wars, but most likely the desert has changed greatly since then due to the forces of the undead King Palawa Joko in the south, Kralkatorrik in the north, and Zhaitan in the west. The conflict sounds exciting and I would very much like to explore the desert.

Also alluding to an advance into the Crystal Desert is this next barrier in the southeast corner of Mount Maelstrom at Judgement Rock near Judgement Waypoint. 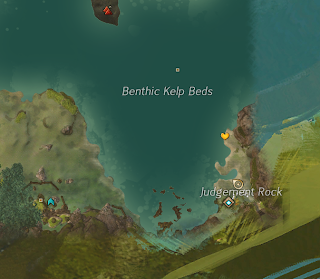 The way is blocked by a overgrown barrier. 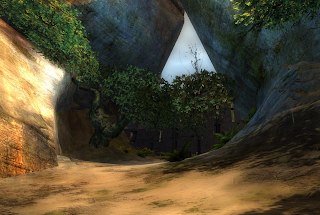 You can jump and get on top of the wall. Looking beyond it you can see a dead end to the right and an open area to the left perhaps where a future portal to a new zone will be. This would then lead to a zone off to the east of Mount Maelstrom towards the Crystal Desert. With Zhaitan defeated in Orr perhaps we will see Tyrian forces exploring the western frontiers of the desert and reestablishing contact with Elona and beyond.

Next we move to the Western edge of Tyria to Brisbane Wildlands near Lionshead Outcrops west of Seraph Observers Waypoint. 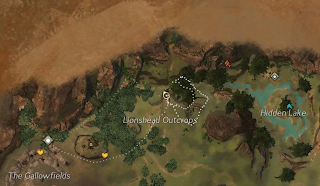 On the top of an unreachable hill you can see a portal to another zone. 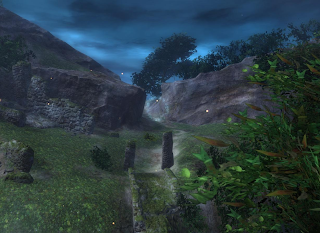 What lies beyond may be something like the Maguuma Jungle seen in the original Guild Wars. What is more liking, however, is that the area is now a wasteland corrupted by the elder dragons, perhaps by the mysterious 6th elder dragon. The fact that this portal is already in game and just a repaired bridge away make me think this may be the direction we go next.

Nearby, in Vandal's Claim, north of Triforge Point Waypoint there is a bandit castle. 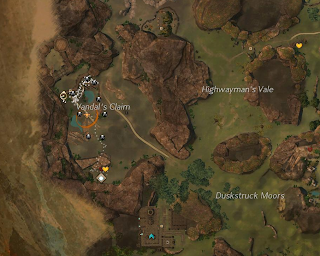 It is occupied by champion level 80 bandits. 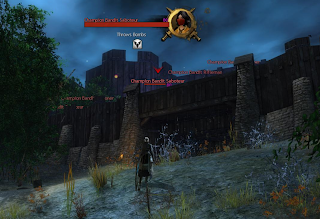 The fort is inaccessible at the moment but shortly after the Guild Wars 2 launched a number of people found their way in which you can see on youtube. Inside appears to be a zone portal heading to the west again hinting at future expansions to the explorable areas in the Maguuma Wastes.

Finally, we head to the north eastern corner of Frostgorge Sound, near Drakkar Spurs. 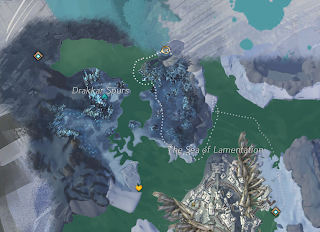 Here we find a pathway leading to an ice wall. 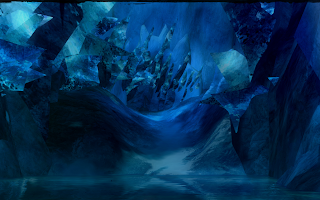 The area where this wall is found is named Drakkar Spurs after one of Jormag's champions. In the Guild Wars storyline Drakkar corrupted Svanir while he was frozen deep in a lake. Though Svanir was defeated we still see his influence in the world of Guild Wars 2 in the form of the Sons of Svanir. Also, the lake that once contained Drakkar is no longer frozen alluding to a future confrontation with him. Perhaps, in future expansions of Guild Wars 2 we will get to track down the source of all this corruption, Jormag, add end him.

Those were all the barriers I was able to find in Tyria. Maybe there are more I have missed. If you know of one please let me know in the comments. I have marked all the above mentioned pathways on to this map of Tyria to help give you an idea of the different areas that we might visit in the near future. 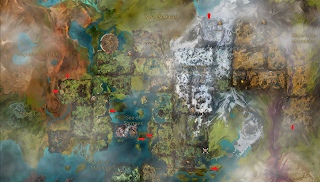 If you are looking for hints as to what might lay beyond you can compare the locations of these pathways to That_Shaman's Guild Wars 2 map. He has marked locations accessible in Guild Wars on to this map. It is a handy tool for exploring the geography and history of Tyria through the two games. The two timelines found on the Guild Wars and Guild Wars 2 wikis also come in handy as a temporal map.

I hope you enjoyed this article. Again, let me know if you see anything similar in your journeys in Tyria. I am sure I probably missed some. Also, let me know which areas you are most interested in seeing opened up. Would you rather visit the Dominion of the Winds or the Maguuma Wastes? Do you want to take on Jormag or Kralkatorrik first? Let me know in the comments.
Posted by Phil at 2:02 PM