Yesterday I started discussing the changes to the Living Story by going over the additions to Hoelbrak, the Black Citadel, and Lion's Arch. Today I would like to finish by looking at the achievements you can complete, the new content in Wayfarer Foothills and Diessa Plateau, and provide you with my thoughts and speculations on the Living Story so far. There is a lot of stuff to go over so I will get right to it. 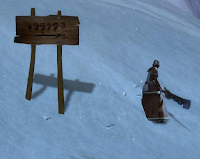 The first thing to know is that most of the content from the February patch is still available. If you haven't finished your volunteer title you can still head out into Diessa and Wayfarer and help the stream of refugees heading through the zones. There is a lot to do which you can find more details about in my article reviewing the February content.

The new content introduced with the latest patch runs in conjunction with the old giving players plenty of time to finish their achievements. There are two new achievements for players to complete this month. The first is titled "The Gathering Storm" and has players defeating Invaders. Dredge and Flame Legion are attacking various targets in the Norn and Charr lands. You will need to kill 150 of them to complete this achievement. In the map below I have marked the location of some of the events where you can find the Invaders. They are marked with a circled flag or a circled gear. 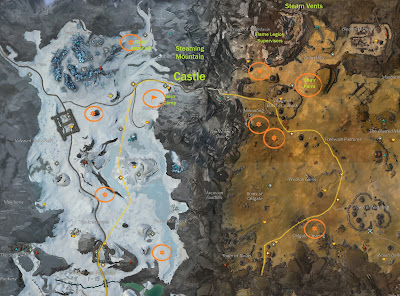 The second achievement is called "Lost and Found" and has players locating trinkets lost by the refugees. The refugees missing the trinkets can be found in Lion's Arch (see yesterday's post). Currently there are two trinkets to locate; Kirk's Goblet in Wayfarer and Malia's Toy Soldier in Diessa. They will spawn at a random location in the zone and you will need to track them down (Dulfy has a map marking some of the possible spawn locations). They can be tricky to find and I wish the NPCs gave in game hints to help you find the specific location. What you are looking for is a sparkling object on the ground (see images below). If you hold CTRL down, as you are exploring, the name will pop up above the object, if it is nearby. Don't give up! If you can not find it right away don't be afraid to ask if anyone has seen it in map chat. 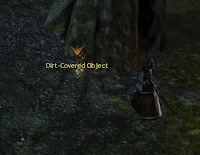 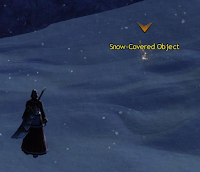 Once you have found the missing trinkets return them to their respective owners in Lion's Arch. You will be thanked for your efforts and learn what the character plans for the future. Here is Malia's response, 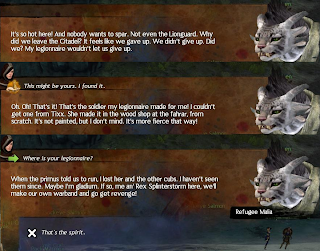 I love this little story. She didn't get to visit Tixx during Wintersday so her now legionnaire made her a replica. Sadly, this legionnaire is now MIA. Touching story and I am glad I could help out. And here is Kirk's response, 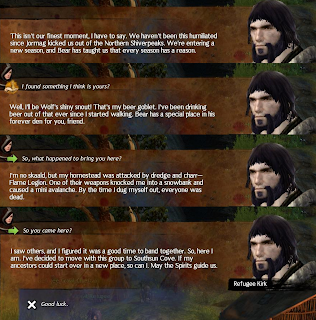 Good thing we returned Kirk his mug. Sounds like he will have a tough future and will need a stiff drink every once in a while. Once you have helped Kirk and Malia keep your eyes on Lion's Arch for new refugees needing assistance. Presumably, at least four more refugees will be added over the coming weeks. When they do show up I will let you know here.

Most of the new content in Diessa Plateau is located in the Northeastern parts of the zone near Butcher's Block. The Invaders are swarming into Diessa through Flame Legion portals and Dredge personnel carriers (circles with gears on the map above). These events were not easy on my poorly geared level 60 Mesmer. The Invaders respawn quickly and you can not damage the portal or personnel carrier until you defeat the spawned mobs. Keep at it and call out for help. There are lots of people looking for Invaders to kill in order to finish their achievements. 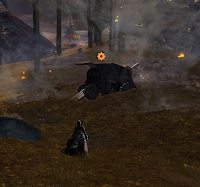 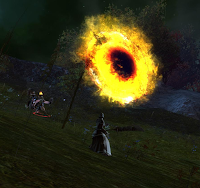 But, wait there is more. There is also a Charr ranch that will occasionally be taken over which will require liberating (circle with a flag on the map above). I liked seeing this event added to the game because you actually get to see some of the devastation caused by the invasion. It helps me stay immersed in the content.

The last thing of note in Diessa were Flame Legion troops within the Dredge camp at the Burrows of Moledavia. I also checked Flame Legion bases in the area but did not find any Dredge. This seems to be telling of who has the pants in this relationship. I had already finished my "kill invaders" achievement when I found this so I was unable to discover if these guys were included for the kill count (Bhagpuss confirms in the comments they do not count). If they are they would be easy targets to get you closer to your 150 invader kills. 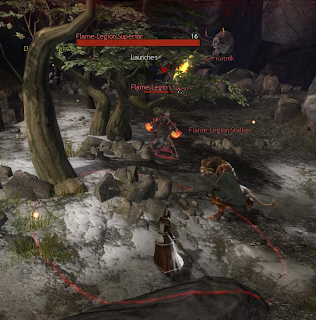 Zola Swiftstep, who I talked about in a blog post on Monday, is still waiting for the Flame Legion attack and seems completely unaware that the Invaders are already here. Maybe this is an oversight by Arena Net or maybe she is keeping tabs on a different Flame Legion base. I hope we see her involvement in events shortly. There are also steam vents north of the Burrow of Moledavia, which haven't changed since I highlighted them in a blog post a couple weeks ago.

The changes in Wayfarer Foothills are in many ways symmetrical to those in Diessa Plateau. Often when I find a change in one zone I make note of it and expect to find a reciprocal changes in the opposite zone. For example, you can fend off the invaders portals and personnel carriers here in Wayfarer as well. 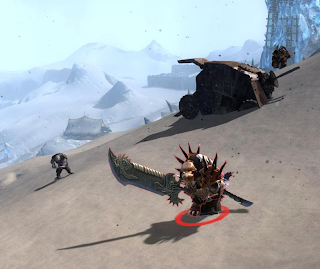 There is also a Norn homestead that needs defending. Again adding to the realism of the refugees situation although I would have like to see more homesteads attacked to explain to quantity of homeless seen in Hoelbrak, the Black Citadel and Lion's Arch. One homestead is better than none though.

The final thing to note in Wayfarer is that the Merchant Bodyguard has disappeared. He used to be standing in the tent show below. I talked about him and the dead merchant a couple weeks ago in a blog post. Check it out for more details on this story. The dead merchant is still in the same place and nothing has changed so you can check that out in game (marked on the map above). 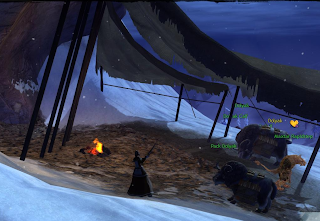 I looked around a little more and could not find any other changes. As always, if I have missed something let me know in the comments.

The last thing to mention is the castle which as popped up on the Steaming Mountain. This is probably the single largest and most obvious change this patch so I felt it deserved it's own section. I have taken a number of screen shots of the castle and noticed a couple interesting things about it but there are still a lot of questions. As you can see in the image below the fort is actually quite extensive reaching up the mountain. 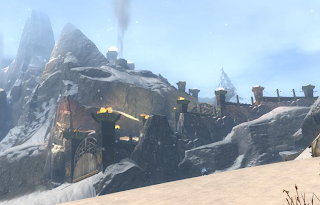 The gates to the castle are formidable and there is a large invisible wall keep players well back from it (presumably to prevent people from glitching through and seeing what is on the other side). 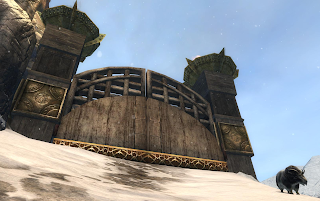 I have tried to get various angles on the castle to see if I can peer inside. My first attempt revealed a second gate beyond the first. 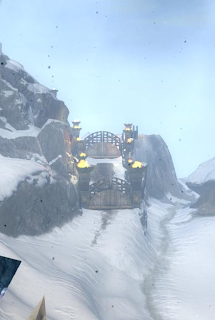 Looking from another angle I spotted wolf totems within the walls. What are wolf totems doing inside this castle? I originally thought this castle would have been built by the invaders. Perhaps that assumption is wrong. 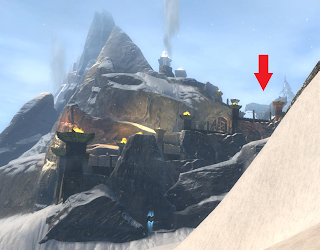 If you head over to Diessa Plateau you can get a view from another angle. Although you can not see the wolf totems you can see something else of note. 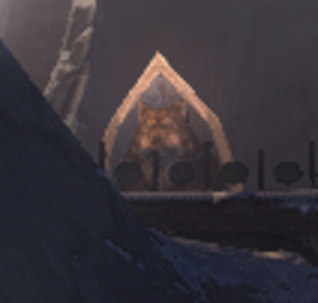 To me that looks like a crest with a wolf on it. So did the Norn build this castle? Do they still control it? There isn't much in game that helps us answer these questions, yet. I could speculate all day about what this could be. I hope to get some facts soon.

Overall, a lot of my concerns about the Living Story have gone away. I criticized the Living Story last week for attempting to tell a story of a scale they were not showing in game. Things have changed in a big way and I am glad to see Invaders and destroyed homes in the world. It adds to the authenticity of the story and helps me stay immersed. I would still like to see some more damage in the world to reflect the scale of the events described by the NPCs.

The only criticism I will level at the new content is towards the "Lost and Found" achievement. I did not like having to wander aimlessly around. I would have much preferred to have been given a hint to it's approximate location instead of just being told which zone it was in. Perhaps, a dialog option on the refugees to ask them where they last saw their prized possession. A minor detail I am sure Arena Net will polish out in the future.

As for the quantity of content I find it hard to judge at this point. Arena Net has stated that we are still within the teaser content and that the story won't really pick up until the end of March. Until we start getting that content I do not see how I can pass judgement. I hope Arena Net will be able to deliver the quantity of content that players are looking for on a weekly basis. If it ends up being as much content as we got this patch every week I believe most people will be very happy. I know I would be.

Personally, I am really enjoying learning about all the characters. The situation with the Grawl is interesting. They seem to be treated like third class citizens and they are not very happy about it. They also do not seem to trust the Consortium. I expect something to become of this and I hope players get to choose sides. Do you help the disadvantage Grawl? Or the powerful consortium? This would really give players a chance to build their character.


As always let me know if I missed anything. I would also love to hear your theories about future events. Also, let me know what you think is the most interesting story covered so far. Thanks for reading my review of the Gathering Storm Living Story content and be sure to check back in the coming weeks for my updates as new content is released.
Posted by Phil at 1:26 AM